The Religious Society of Friends, also known as Quakers, originated during the chaotic time of the English Civil War in the 1640s. They were considered a radical form of Christianity because they rejected the authority of the established Church, its clergy and its outward forms and rituals. Instead, Quakers sought a “restored” Christianity based on the plain and simple teachings of Jesus and the witness of the primitive Church. They emphasized the direct leadership of God in their lives, believed in the spiritual equality of women and men, acknowledged the “light of God” in all people, and developed habits of nonviolence, decision-making based on the unity of the community, plainness and absolute honesty and integrity.

In 1837, Guilford College opened as New Garden Boarding School, an institution intended to serve the children of the Religious Society of Friends living in and around Guilford County, N.C. New Garden Boarding School provided a “guarded” education, one in which children of Friends could be formed in an environment shaped by the Quaker testimonies. The first students at the school used the “thee’s” and “thou’s” of Quaker plain speech, dressed plainly, worshiped in the silence of the Quaker meetinghouse, and were schooled in the simple truths of the Bible and the Quaker community. As Quaker society changed and the school grew into a less separated and more diverse college, Guilford constantly interpreted and reinterpreted what core Quaker testimonies were important in its life.

Hege Library will host its second annual African American History Month brown bag lunch presentation, this year featuring Vice President for Academic Affairs and Academic Dean Adrienne Israel. Her talk will focus on the Underground Railroad activities of Quakers who lived in the New Garden community and free black people who lived in this part of Guilford County during the antebellum period.

The context is 19th century slavery in Guilford County, the history of free blacks in this region during the era of slavery, Quaker influence in the county, and how these three elements seem to have overlapped to make Underground Railroad work possible in this part of the slave-holding South. The presentation will be based on Adrienne’s research in progress and illustrates the significance of Friends Historical Collection primary sources in her area of study.

Adrienne holds undergraduate and master’s degrees from Howard University in English literature and African studies, respectively, and a Ph.D. in history from Johns Hopkins University. Throughout a long and notable career of teaching, scholarship and administration, commencing at Guilford in 1982, she achieved full professorship in history and intercultural studies, and served as Humanities Division director and interim associate academic dean and director of faculty development. She has served the College as academic dean since 2002, first in an interim capacity, and in 2003 was selected academic vice president and academic dean following a national search.

For many years, it could only be estimated. But now the age of the Underground Railroad Tree is known–310 years, give or take a decade. Earlier this month, Kyle Dell, David Petree and Max Carter joined Paul Knapp, a dendroecology professor from UNCG, to core and date the huge tulip poplar tree in the Guilford Woods that has been known for decades as the Underground Railroad Tree.

After walking through the Guilford Woods, which Knapp described as an “extremely unique and rare example of urban forests in the Piedmont,” he and his graduate students cored the tree in two different places. They have prepared the two core samples in their UNCG lab, one of which will soon be returned to Guilford for display.

Knapp shared this, “The sample we collected dated to A.D. 1778 and we estimated that there were at least another 75 years of growth beyond what we could sample. A conservative age estimate would be approximately 310-years-old, but an age approaching 350 years is possible. We did not detect any rot in our sample, suggesting that the tree is structurally sound. The most recent ring widths showed no growth decline and the tree appeared visually healthy.”

Gwen Gosney Erickson, director of the Friends Historical Collection, offered a disclaimer of sorts, noting, “There are sections of the Guilford College woods which have remained old growth and resulted in some trees of notable size. This tulip poplar is often featured on historical walking tours and has become known as the ‘Underground Railroad Tree.’

“Due to their present size and age, these trees were likely silent witnesses in the forest in the first half of the nineteenth century when enslaved African Americans and others using the woods as a protective cover passed by and so provide a nice sense of continuity. However, there is no documentation that any particular tree held significance. Presumably these trees that are now notable would have been much smaller in their youth, and therefore not used as a landmark as they are today.”

Carter, for one, is glad to have the estimate. He’s been talking about the tree for years, and is glad to know he hasn’t been exaggerating.

Dell, who is a faculty member in environmental science, said that having the tree on our campus provides a valuable touchstone to his students who are interested in experiencing first-hand the human and environmental history of Guilford’s campus.

“When my students bear witness to the tree and even touch it, they become a part of the tree’s history in ways that connect them deeply to the core values and experiences of Guilford,” Dell said. “Paul Knapp, who did the coring, praised Guilford for exercising such stewardship of its land, the forest and the Underground Railroad tree in the face of urban sprawl, pressing economic needs and other factors.

“Sharing our woods with Paul, as an expert on using trees to better understand ecosystems and climate change, was a special experience and reinforced to me the need to maintain robust land management and preservation practices at the College.”

Ways to engage in history!

Pathway To Freedom  is an outdoor drama showing the hardship and heroism of the Quaker community as they helped enslaved African Americans in the 1840's and 1850's. The play re-enacts the fateful decisions to escape on the "Underground Railroad" in North Carolina to get to Indiana. 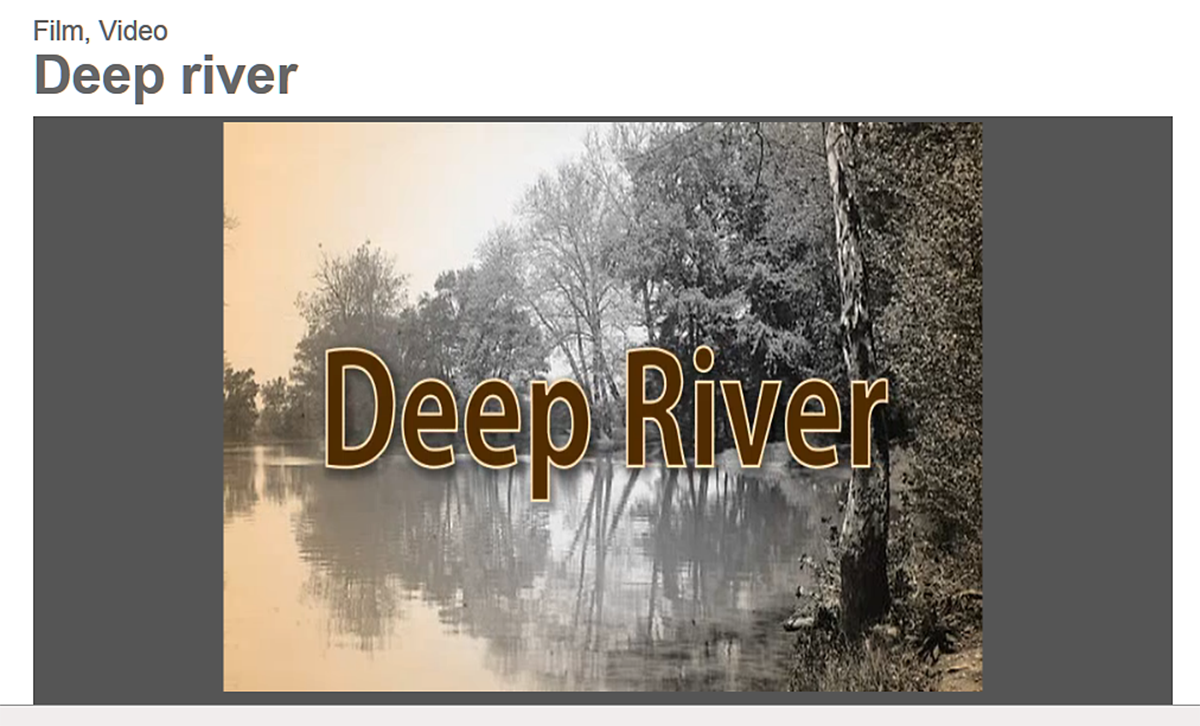 Oh, don't you want to go,
To the Gospel feast;
That Promised Land,
Where all is peace?

Oh, deep River, Lord
I want to cross over into campground.

[Note: There are different variations of this song.]

Questions about the meaning of these words:

Could they refer to the Deep River in Jamestown, Guilford County, North Carolina?